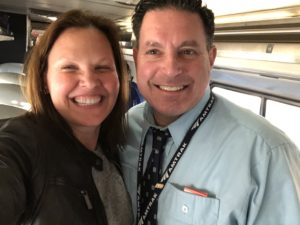 Houston author Chris Cander’s “Dispatches from Book Tour,” a multi-week blog series of reflections and updates along her 17-city U.S. book tour for her new novel The Weight of a Piano (published by Knopf), continues with Dispatch 9 from Springfield, Massachusetts.

I caught the train from Penn Station to Springfield, Mass for a relaxing, 3-hour ride. About the time we were to arrive, the train stopped. Nobody said anything, nobody moved. I assumed we were letting a southbound train pass, as we had a while earlier. My friend was at the station waiting for me, and sent a text asking if we were late. Finally, just as the train started moving again, I asked the conductor what was happening, and he said, “Springfield was twenty minutes ago! Why didn’t you get off?” 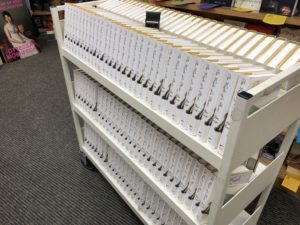 My face flushed. “I didn’t hear an announcement.”

He laughed and patted my shoulder. He called my friend so they could decide where she should pick me up, then moved me and my stuff close to the door and said he wouldn’t let me miss my stop this time. Now Greg and I are pals for life. 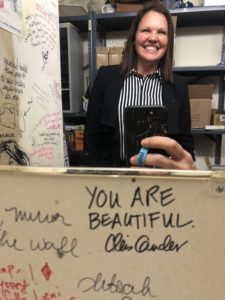 The event that night at Odyssey Bookshop was so great. The store, founded by current owner Joan Grenier’s father, is celebrating its 55th anniversary this year. I got there early to sign 200+ copies for their First Editions Club and finished in time to visit with some of the attendees, including my cousin Sheri and her friend who drove 90 minutes to be there, and the nephew of a woman in my mother’s book club in Industry, TX. Even with extra chairs, the room was packed, and the attendees asked many interesting and thoughtful questions. We went way over our allotted time, but it was so worth it. Afterward, Joan asked me to sign their infamous bathroom wall. I found a spot next to the mirror and sent this message out to all you beautiful readers.