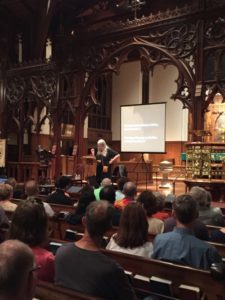 Beard first described her personal investment in Roman history by detailing a visit in 1973 to the eternal city. What struck her most was not the ancient remains or the Renaissance art, but the SPQR emblem still stamped on manhole covers, door handles, and garbage cans. Representing the Latin phrase for the Roman Senate and People, it is the longest running acronym in the history of the world. 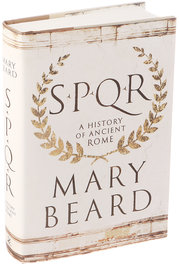 Unlike many writers, who take their importance for granted, she presented a pressing question. “Why do we need another history of ancient Rome?” She then explained that new findings about Rome are being discovered all the time, enriched “by the appliance of modern science.” For example, researchers in Greenland working on ice caps took “deep borings of cores that contain certain traces of pollution from Roman industrial processes.” She then humorously shared an unsexy image of the researchers’ refrigerator in Utrecht.

An image of the skull of a Roman Britain flashed on the screen. Findings such as these “help track migration and movement of people within and across the borders of the Roman empire.” She explicated an amazing story of an unremarkable tombstone from Northern Britain. The monument illustrated a sitting woman with “a treasure chest at her feet and woolwork in her lap.” Regina, who Beard afterwards referred to as “Queenie,” was a freed Roman slave who married a man whose teeth indicated that he came from Palmyra in present day Syria.

Information about the couple from the third century AD was commemorated in Latin and Aramaic. “What language did they speak at home?,” mused Beard. She impressed that this was “just one isolated example of the ancient mobility” of peoples. In fact new research shows that 20% of the people who died in this particular graveyard grew up a considerable distance from where they were born.

Another of Beard’s favorite examples of newly unearthed histories of common people is the excavation of a sewer underneath “a small plot of Roman flats” in the city of Herculaneum. She reassured us that the material most resembles “upmarket compost…bags and bags of which are being analyzed in Cambridge.” Far from the exotic depiction of Roman cuisine including dormice and and fashionable purging in vomitoria, it reflects the diet of “everyday Roman people,” who ate figs, pomegranates, eggs, pork, fish, chicken, and a little puzzlingly, the delicacy of sea urchins.

For Beard, history is all about “carrying on a conversation with the past.”

For Beard, history is all about “carrying on a conversation with the past.” Her lens of modern feminism helps contextualize the mythology of ancient villainous women, such as Livia, Augustus’s wife often portrayed as cunning and threatening. She quipped in an aside that she’s “not sure it’s that much different now.”

One of the most remarkable things about Roman history, according to Beard, is the sheer volume a written work that has passed to us today, including Cicero’s jokes. That legacy resonates through “the Italian parliament building in front of which urlesque has his cappuccinos.”

Beard’s ability to link issues of the past with dilemmas of the present is nuanced and valuable. For instance, she describes the consequences of the ancient Catiline conspiracy as a dilemma of “homeland security.” That is, the security of the State versus the rights of citizens has direct parallels to our dealings with ISIS and Guantánamo Bay.

Her compelling story of how Rome transformed from a small village, “a bit of a dump” to an extensive overseas empire becomes remarkably contemporary. Her book moves gracefully from a stone coffin on the Appian Way to the British Manor where parts of Harry Potter and Downton Abbey were filmed.

After the presentation, Beard generously answered questions moderated by Dr. Corby Kelly, a literary Houstonian whose accolades include a PhD in classics from Stanford University. Their fascinating conversation incorporated protests about a Mexican studies textbook in the Texas State house and Nero, Brexit and England’s legacy of isolationism from the continent and Scipio, Byzantium and hygiene, genocide and the delicate art of writing for an audience that is “intelligent but ignorant.”

She stresses that the difference from teaching undergraduates at Cambridge to expounding on history to watchers of television programs is minor and “technical.” The issues, she contends, are exactly the same as the cycle of imperial power roils on. Roman history “can help you look at your own world from the outside.” It helps to have Mary Beard as our Virgil.