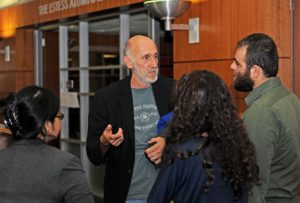 On August 24th, the UH Creative Writing Program started things off for the Fall 2016 semester by allowing long time chair, J. Kastely, to quit his job.

Kastely, who suffered through what must have seemed like a million (it was only 14) years of whiny writers of the undergraduate, graduate, and faculty persuasion, was ceremonially unchained and allowed to roam free from his office, to pursue his varied philosophical interest.

The Creative Writing Program was reluctant to let Kastely go, because Professor J. Kastely was truly excellent at this job—no joke, sublimely so—and none of the subjects interviewed for this blog post could imagine a Creative Writing Program without him. And yet novelist Alexander Parsons has generously agreed to step into that role, at least until one of our bear traps proves successful. 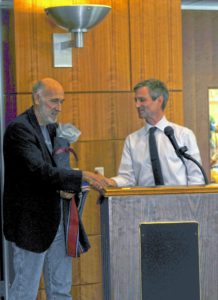 While Professor Kastely was widely considered the Larry Bird of academic administration, he was given a Bob McAdoo Detroit Pistons jersey as a parting gift, in honor of Kastely’s ability to use his knowledge of failed NBA management techniques to create winning university faculties.

Professor Kastely was also given a bottle of single-malt scotch, as comfort for when he misses us.

Addendum: We regret to report that Professor Kastely has been recaptured. He is now, sadly, the Chair of the entire UH English Department.

Mat Johnson, a faculty member at the UH Creative Writing Program, is the author of the novels Pym, Hunting in Harlem, Drop, and Loving Day; the nonfiction novella The Great Negro Plot; and three graphic novels, including Incognegro.