Calling all Houston Readers and Writers!

Glass Mountain, an undergraduate literary journal at the University of Houston, has recently gone national. Accepting works from all over the states, this literary journal is bringing its work to you here in Houston, every third Tuesday of the month, at Brasil Café. The Glass Mountain Reading Series is a new series primarily geared to emerging writers who are looking to improve their work and participate in the writing community. In an interview with managing editor Steven Simeone and coeditor Brett Forsberg, they explain their reasons for starting the Glass Mountain Reading Series and tell Inprint some of the journal’s goals and plans for this year.

Brett: I got this idea that everybody working at the magazine should bring something to add to the magazine. We’ve been around for at least 7 academic years and we became national about a year and a half ago. Slowly, the magazine has started growing and we wanted to help that by kicking off with a reading series. And the best part about the reading series is that we have a visiting writer come to inspire readers and to cultivate the undergraduate writing community.

Inprint: Have most of the readers you brought been published in Glass Mountain?

Brett: Right now, most of the undergraduate readers are staff members at Glass Mountain to get the reading series started, because we are part of the magazine and want to keep the staff at Glass Mountain both interested and involved.

Inprint: Where do you find the Visiting Readers?

Brett: Really anywhere we can. We have a great resource by having the UH Creative Writing Program faculty, but we want to branch out a little bit. The last reading we had Marcell Murphy, a slam poet, who has a certain level of renown that is a bit different from the academic figure. One of the people I work with is a playwright and he tours up and down the West coast and does improv. He doesn’t want to read until around October, but we just want to bring in people from the artistic community in Houston. Basically anyone who has a lot of experience and wants to help the undergraduates with their work. I mean we were lucky enough to get Rebecca Wadlinger for the very first series.

Inprint: Both of you are fiction writers. How do you feel the readings have improved or changed your writing?

Brett:  Building on what I said earlier, you start to read work and you realize you have to adapt it because you’re not reading it for yourself. It’s not just limited to an introverted activity. You learn to catch people’s attention in a noisy environment. You really have to cut so much out of a story that you feel like it needs to be there but it really doesn’t. You just need to say enough to catch people’s attention and then move on to the next thing. So it’s like people trying to catch up to you. It drastically changes your work.

Steven: It definitely teaches you how to write like a minimalist. The other thing it does, and I stress this all the time, a lot of the writing that you do in an early draft is for you and not for anyone else. So you wind up cutting a lot of that stuff so you can perform it at a reading and engage your audience. It’s a nice exercise and makes you have more impressing moments.

Inprint: I didn’t go to the very first reading, but, this last one I was at I noticed that you brought in a visual artist to accompany the readers. Do you intend on doing that more often?

Brett: We try to add something special each time. I’m going to try and bring in a different musician each time, especially for this next reading.  The visual artist was actually Glass Mountain co-editor Scott Chalupa’s idea and we thought it would be great to bring in different mediums of art.  If we can keep something around like this, then we will definitely continue with that. These first readings are mainly about making people comfortable with the art community that we try to bring in each time—keeping their interest and attention to bring them back. 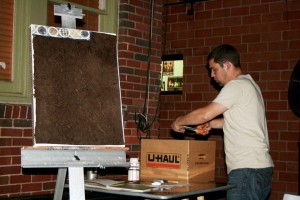 Inprint: How were you able to get the reading series started at Brasil?

Steven: Actually, the owner of Brasil approached us a long time ago. He wanted to do something with us because he knew a couple of people on staff and we knew writer and Poison Pen staff member, Greg Oaks. Greg kind of pushed it for us and the owner of Brasil just sort of gave us carte blanche. So this has been the kick starter. We’ve done the national thing, we’ve built up our national base of people that are submitting now, we’ve been getting the percentages that we want, and now this is the next step.

Brett: We already have a lot of submissions and most of them are from out of state and we haven’t really started pooling through them just yet. We should definitely be very proud of the next issue. Hopefully, we can invite some of those people to come read and if that works out, if we can hit that goal, then that would be the perfect year for me.

Inprint: So when is the next reading and what does the next line up look like?

Brett:  Tuesday, Sept. 18th, and the Visiting Writer is a surprise. The next line-up is Catherine Robb and possibly Joseph Roberts.

Inprint: Finally, what do you think the Glass Mountain aesthetic is?

Brett: I would say that our aesthetic is specifically work that is close enough to polished as an undergrad because it’s really rare that an undergraduate produces a piece of work that is given an overall sense of completeness.  For example, Steven might have a completely different aesthetic opinion than mine but we both look at work that is tied together as best as it can be. We want the best undergraduate work there is out there.

Steven: It’s such a loaded question because it makes people think that we only publish certain things, but what is difficult about the aesthetic question is that it has to do, once again, with this turn around in staff. Let’s say you have the same editors for 10 years, then you’ll see a certain aesthetic start to develop. Every editor has certain biases towards what they like and dislike. It’s not that we can’t tell the difference between good and bad writing. It’s just that when you look at 12 submissions and you only have to pick 4 out of those 12, then you’ll probably pick out the best and closest to your own style. But because we have such a fast turnaround in staff, you don’t see an exact style. Plus, the fiction editor and the editorial editor have power over the readers, so they might say I don’t think something is good but the fiction editor might say that this is exactly my style. However, if you notice some of our current issues, you will see that we definitely have started publishing much shorter pieces as opposed to the 20 page stories we used to publish. Again, that’s just part of the different staff who are making those decisions.

Glass Mountain Reading Series is calling all readers and emerging writers to come sit with other visiting writers, UH faculty, and artists every third Tuesday of the month at Brasil Café. For more details and information about Glass Mountain visit: www.glassmountainmag.com.

Gabrielle Mendieta is an intern at Inprint. She is also a fiction writer and philosophy student at University of Houston. Her work can be found in Glass Mountain and other places. When she isn't writing or helping Inprint, she's usually cycling and drinking coffee--hopefully not at the same time.