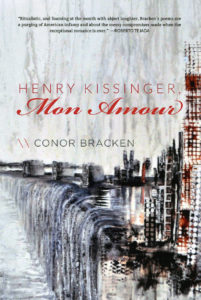 On Friday, September 22, the Houston literary community gathered at Brazos Bookstore to celebrate the release of Conor Bracken’s award-winning chapbook Henry Kissinger, Mon Amour. The manuscript was the recipient of the 2017 Frost Place Competition sponsored by Bull City Press. Bracken, a former Inprint Fellow and current Inprint Poetry Busker, is an active local writer and teacher, and the event was warm and collegial. 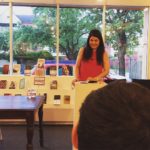 Fellow University of Houston Creative Writing Program alum Analicia Sotelo helped introduce and open for Bracken. She described Bracken’s work as interrogating “the white male situation.” Their writing shares, Sotelo says, an interest in “the subtle exploration of power play.” She proceeded to read from her own accomplished chapbook Nonstop Godhead, which includes such titles as “Apologia over Marinated Lamb” and dwells on major Hispanic modern painters such as Salvador Dali and Frida Kahlo. 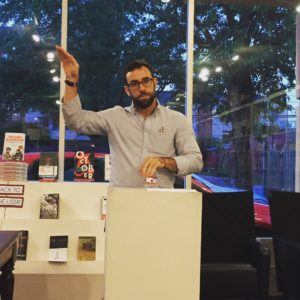 Bracken began by shedding light on his process and project, with the figure of Henry Kissinger as a model for “everything wrong with masculinity.” He briefly explained that Kissinger was a national security adviser and the head of the state department, the kind of politician who “advocated the Cambodian bombing campaign and facilitated Nixon’s trip to China.”

While seeped in historical research, the book’s concerns are very present. A line from the first poem in Bracken’s collection—“We flossed / with the flags of every country but our own”—sets the tone for his probing curiosity. This chapbook examines a wide range of American culture from a tort law to the opioid crisis to tramp stamps to a firing range to his in-laws’ backyard in Vermont.

Bracken teased out his family history of Marines and diplomats, as he explained how he necessarily “presents as a hegemon” due to the color of his skin. “I’m striving for a whiteness that’s translucent,” he writes.

Even when the action of the poem is located in Buenos Aires, Bracken’s focuses in on U.S. involvement in shaping its governmental policy. He writes movingly about the Argentinian Dirty War, the crisis of disappeared young intellectuals, and government-sponsored censorship: “they [redacted] [redacted] nine.”

Coincidentally, Bracken read in front of a display case of Russian and Soviet literature. I think Tolstoy and Svetlana Alexievich and Trotsky would smile their approval upon the event and this revolutionary chapbook.