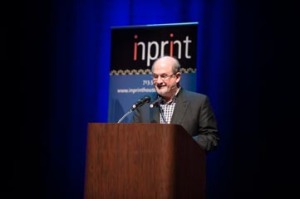 Ibn Rushd, the hero of his new novel, is a scholar committed to recovering the legacy of Aristotle, so right away the fusion of the east and the west is established in a way that winds itself through the entire novel. The allusion hovering over the narrative is to A Thousand and One Nights, a work Levy tells us prompted this response from Rushdie in a 2006 interview: END_OF_DOCUMENT_TOKEN_TO_BE_REPLACED 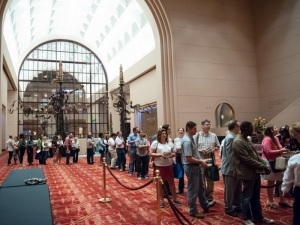 As the 2015/2016 Inprint Margarett Root Brown Reading Series continues tonight with a sold out reading by Booker Prize winner Salman Rushdie and a long book signing line expected to follow, Houston writer Sam Dinger gives us his take on how he prepares for the magical moment when he gets to meet one of his favorite authors.

I just rushed out the back of the room to get a good spot in the book signing line. I’m holding a clean, new copy of the new book. There is paperdust on the edges of the pages. There are something like a million of us in this line and it’s looking like I won’t have the chance I hoped  to have a meaningful interaction with this writer I love, or want to love, or, let’s face it, whom I want to love me. But all hope isn’t lost. I remember that there are things I can do. I have a plan.

In the many book signing lines that I’ve stood in, I’ve developed a list of things that I do to up my chances for any of the above hopes–that is, for the chance of a meaningful interaction. Some of them are simple and small, others require a little something more. END_OF_DOCUMENT_TOKEN_TO_BE_REPLACED 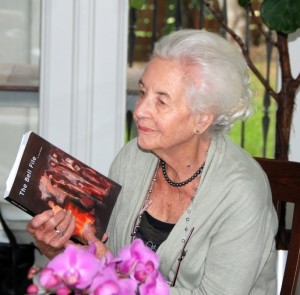 Earlier this fall, I had the privilege of meeting a fascinating local writer, Tonja Koeppel, who in her 90s, just published her third novel, The Bell File. Genuine, graceful, and very sharp, Tonja came to creative writing later in her life. She began her career by working as a science writer for newspapers and magazines in Switzerland where she was born and grew up. When she came to the United States, she taught chemistry at a university in New Jersey. After she retired, she signed up for a writing course at Rice University which then launched her writing life.  Her other novels include Astral Twin and Secret of Adamant House. The Bell File is her first self-published novel through Amazon.  END_OF_DOCUMENT_TOKEN_TO_BE_REPLACED

Welcome to Inprint’s new blog An Open Book. For close to three decades Inprint has been lucky enough to provide Houston with readings, writing workshops, fellowships for emerging writers at the University of Houston Creative Writing Program, and much more. We’ve witnessed other literary initiatives take root and flourish, and we’ve seen Houston develop into a great city for readers and writers. So much is happening in Houston’s literary scene, we can barely keep up ourselves.

Not only is there exciting local news, but Houston’s literary community has a synergistic relationship with national literary events and trends. We’re influenced by what is happening nationally, but Houston writers and our events are having a direct impact on shaping the global literary scene too, and that is something we are very proud of. We are part of it, not just a result of it. END_OF_DOCUMENT_TOKEN_TO_BE_REPLACED